Six jobs of tomorrow to train for today 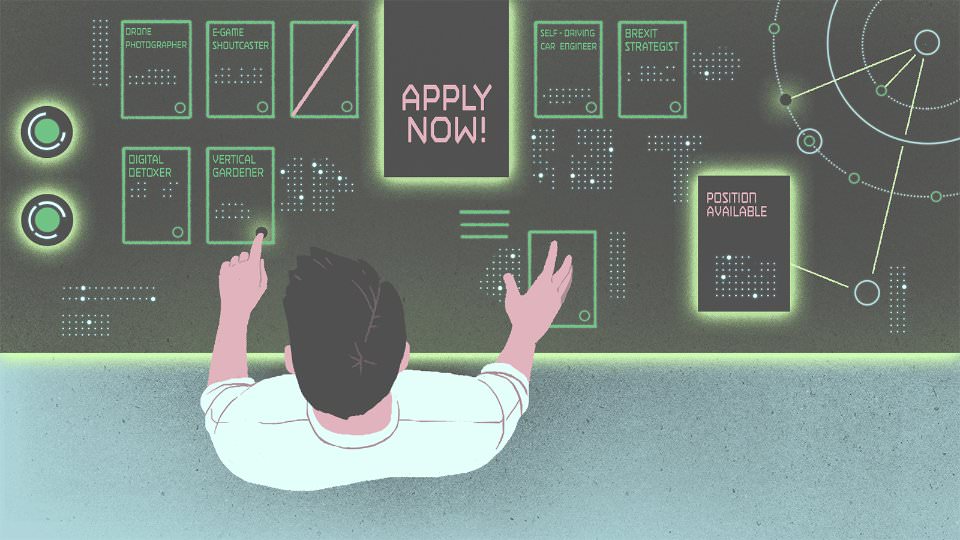 Brexpert, drone photographer, self-driving-car engineer… What will your next career move be?

Whether you’re about to join the workforce for the first time or thinking about making a career change, there have never been quite so many jobs to choose from. In this era of rapid technological and political change, a new kind of career seems to emerge every week, driven by the expanding reach of the internet, by social and cultural trends and even by the burgeoning demands of Brexit.

According to a recent report in The Times, labour analysts at the UK’s Office For National Statistics (ONS) are looking at proposals to add new job classifications to its data, including mobile app developer, game designer and digital marketeer. Many of today’s young people may end up doing jobs they haven’t even heard of yet. Perhaps the ONS ought to factor some of the following freshly minted careers into its thinking. 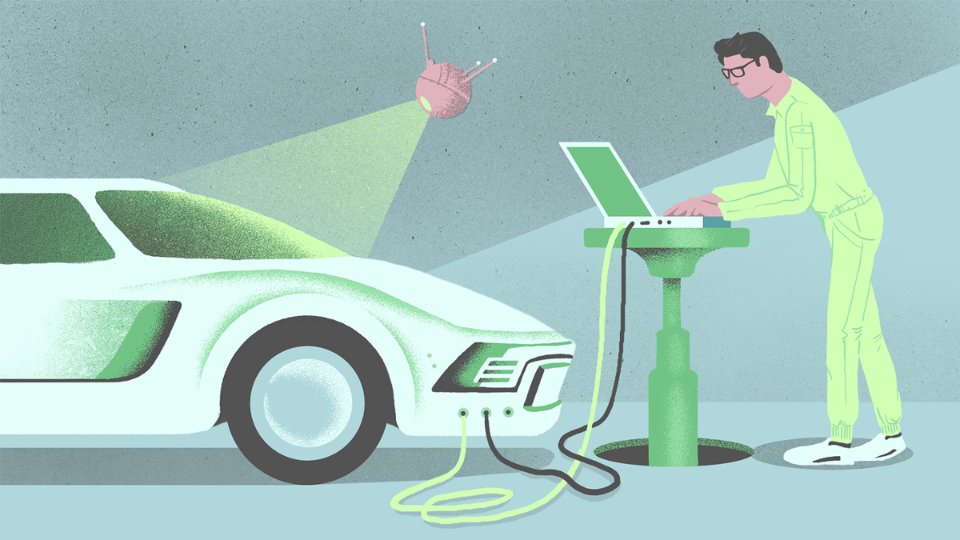 Self-driving cars may not be whizzing through the streets just yet, but almost every major manufacturer has committed to producing an autonomous vehicle in the next decade. Tesla’s Model 3 saloon rolled off the production line in July and has the option of an Autopilot self-driving system. Tech giants such as Google and Uber are also in the race to get the first mass-market self-driving car on the road. That means there’s a growing demand for engineers and programmers who know how to build and maintain them.

Mr David Silver has worked on software at Ford’s self-driving car facility in Silicon Valley and now teaches the Self-Driving Car Engineer Nanodegree programme at online education organisation Udacity. The nine-month course prepares software engineers to work in the autonomous-vehicle industry. “We’ve had 8,000 students enrol from around the globe, and we’re now seeing our students get jobs with the top companies in the field,” he says. Most of them come from a computer engineering background and are already proficient programmers, ready to tackle topics such as computer vision, robotic controls and path planning as part of the nanodegree.

Aside from the regulatory hurdles, the self-driving car market must also wait for the cost of certain cutting-edge technologies – high-end digital mapping or Lidar proximity sensors, for instance – to come down before the driverless dream becomes a reality for the masses. Mr Silver says the revolution can’t come soon enough. “Self-driving cars have the potential to change the world in ways we can’t even imagine,” he says. “They bring down the cost of transportation, which makes it easier for people to get to work and school. We’ll be able to use more of our cities for living, instead of for parking. We’ll be able to spend time with the people we love, instead of navigating through traffic.” 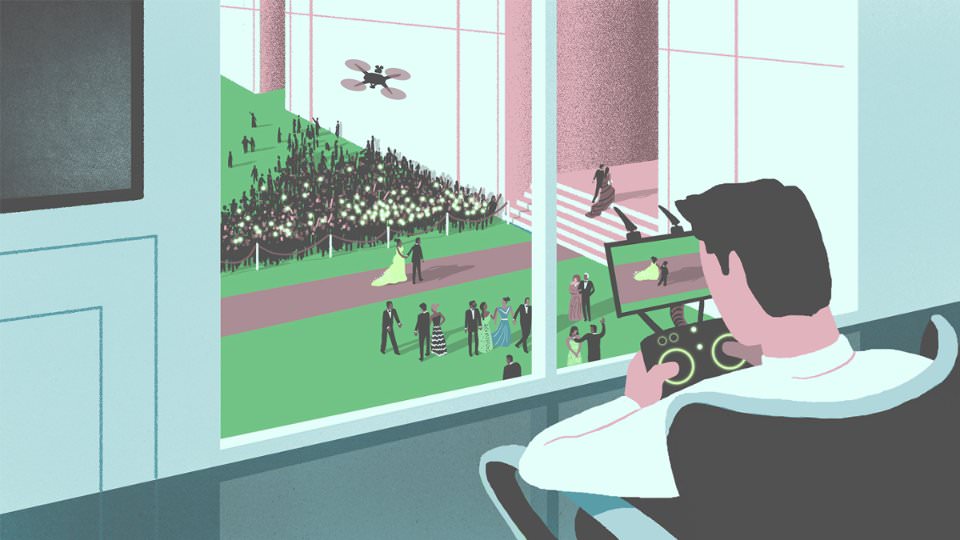 Helicopter pilots probably aren’t too happy about it, but the market for drone photography has grown exponentially in recent years, from TV news to feature films, golf courses to wedding videos. Mr Toby Pocock first watched some drone footage in 2012, decided he had to try it himself and bought a £1,000 drone. Within six weeks of passing his Permission For Commercial Operations – the driving test for drone operators – he was shooting footage professionally for McLaren and Rolls-Royce. With his company Skyvantage, he has since filmed Sir David Attenborough, Mr Lewis Hamilton, Kew Gardens and the Emirates Stadium. “It became a viable business very quickly,” he says. “Back then, there were about 250 registered drone operators in the UK. Now there’s more like 4,000.”

Mr Pocock’s background was in graphic design. “I’m not particularly techy,” he says. “I’m not someone who ever wanted to play computer games or drive remote-control cars. It was just about what I could create visually with a drone that I couldn’t with a static camera.” Most people who try to make it as a drone pilot are not technically minded, he says. “They’re really into it as a hobby, but those people who are more technical than visual can struggle. They don’t necessarily understand filming and aerial photography. I think you have to come at the job from the creative side.” 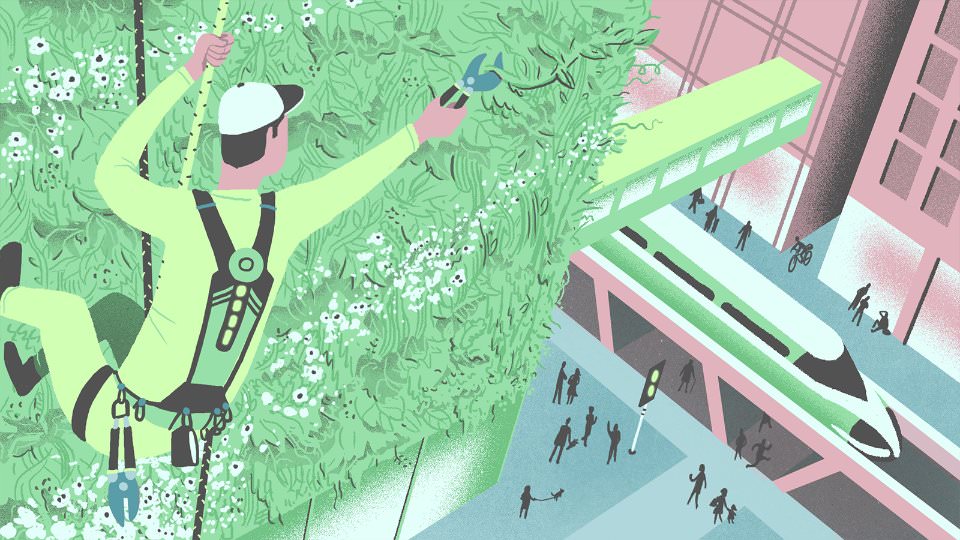 Living walls are a growing (sorry) sector of the city landscaping business, thanks to advances in irrigation technology and a recognition that greenery is good for our mental health. They’re popular in urban residential gardens, but also on a grand scale such as Milan’s Bosco Verticale (Vertical Forest), two residential blocks of 26 and 18 storeys that have terraced gardens all the way to the top and host some 900 trees. Creating and maintaining a garden on the side of a large building – inside or out – takes more than just plant knowledge, according to Mr Gary Grant of The Green Infrastructure Consultancy, which designed one of London’s biggest living walls, on the Rubens Hotel in Victoria. “There’s an increasing need for horticulturalists who also have other skills, such as engineering, plumbing or abseiling,” he says.

UK suppliers and contractors have started to manufacture and install sophisticated living-wall irrigation systems, which can be monitored and managed via the internet. The availability of living-wall technology has been matched by an increasing demand, driven by the so-called wellbeing agenda. “Now that public health officials know vegetation improves mental and physical health, suddenly it’s not just pretty, it’s practical,” says Mr Grant. He suggests vertical gardens can reduce staff turnover, provide noise and weather insulation, improve air quality and absorb rainwater to reduce the risk of floods.

Garden designer Mr Daniel Bell first created living walls with Frenchman Mr Patrick Blanc, the godfather of vertical gardening. Now he is working on living-wall designs for the Mandarin Oriental hotel in London and a shopping mall in Tehran, one of the biggest in the world. Mr Bell shuns computer technology in favour of a natural irrigation system, which involves planting foliage in capillary matting, which is created from recycled clothing. He has found more and more work as architects and planners come to appreciate the environmental benefits of green walls. “There’s a building outside the central station in Malmö where the architects were having real trouble getting planning permission,” he says. “As soon as they slapped a living wall on the side of it, it was easy.” 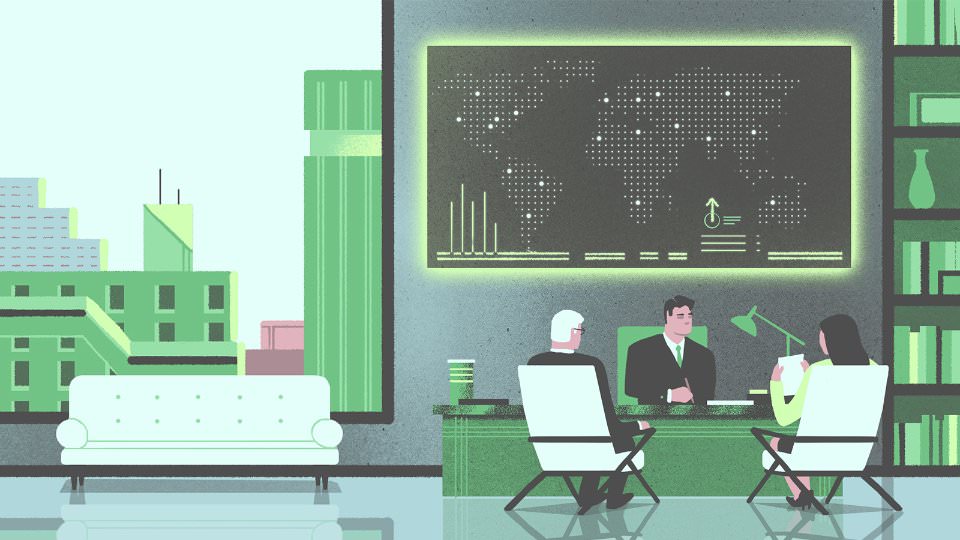 Brexit may end up costing a lot of jobs, but Brexit Secretary Mr David Davis and his team aren’t the only ones burnishing their CVs. Many companies and organisations have appointed their own Brexit chiefs – and some whole teams of so-called Brexperts – to lead their planning for life beyond the European Union, developing new trade relationships, dealing with a new regulatory framework or relocating large numbers of personnel.

Professional services firm KPMG appointed senior partner Ms Karen Briggs as its head of Brexit within weeks of the referendum last June, to advise its clients in the UK and worldwide on the financial impact and implications of the vote. The firm’s chairman, Mr Simon Collins, called Brexit “a pivotal moment in UK business history” that would “dominate the business agenda for some time”.

It isn’t only City and financial businesses that will be affected, though. The University of Oxford clearly thought tackling Brexit was a job as complex as brain surgery, so it appointed a neurologist, Professor Alastair Buchan, to be its head of Brexit strategy. His role, it seems, is to lobby for a form of Brexit that will allow the university to continue to benefit from access to EU research initiatives or the Erasmus student exchange programme, while also identifying new opportunities to develop and attract student, teaching and research talent from elsewhere in the world, post-Brexit. Media organisations have responded by creating new roles, too. The Telegraph, for instance, recently appointed a Brexit editor, a Brexit commissioning editor and a Brexit correspondent. 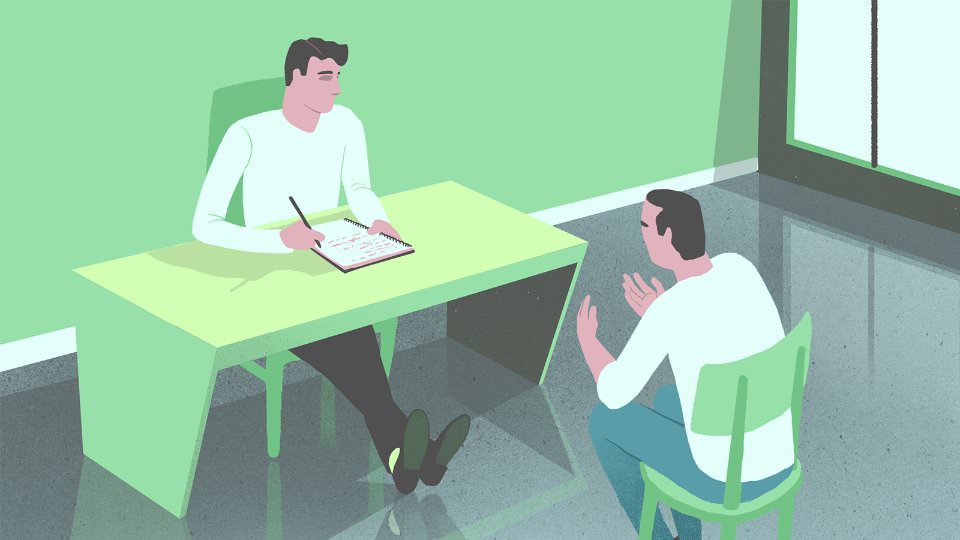 Social media has spawned countless new careers, but for most of us it’s an addictive distraction, which might explain the success of digital detoxing businesses such as Time To Log Off, which runs device-free retreats for people who need to escape the tyranny of their screens. Far from being a Luddite, founder Ms Tanya Goodin was a digital entrepreneur for 20 years before she set up the firm in 2015. “My focus and concentration were shot to pieces,” she says. “I was sleeping very badly. I wasn’t productive, had no creativity or ideas. I wondered if it was something to do with screen use.” She undertook a two-month digital detox. “The results were phenomenal,” she says. “All my creativity came flooding back. I became quite evangelical about it.”

Business really boomed late last year, after Ofcom published a report that found more than a third of UK adults had attempted some form of digital detox. “I was inundated with calls,” says Ms Goodin. “It finally became acceptable for people to talk about it,” she says. After researching the digital detox movement in the US, she found a company there that organised technology-free summer camps for adults, and decided Europe needed something similar. Time To Log Off offers resources and research to companies concerned about their employees’ digital habits, but the core of the business is its retreats to Italy and elsewhere. The digital detox sector is only set to grow, with many travel firms and establishments now adding digital detox elements to their offering. Mandarin Oriental, for example, has introduced a digital detox initiative to all its spas worldwide. 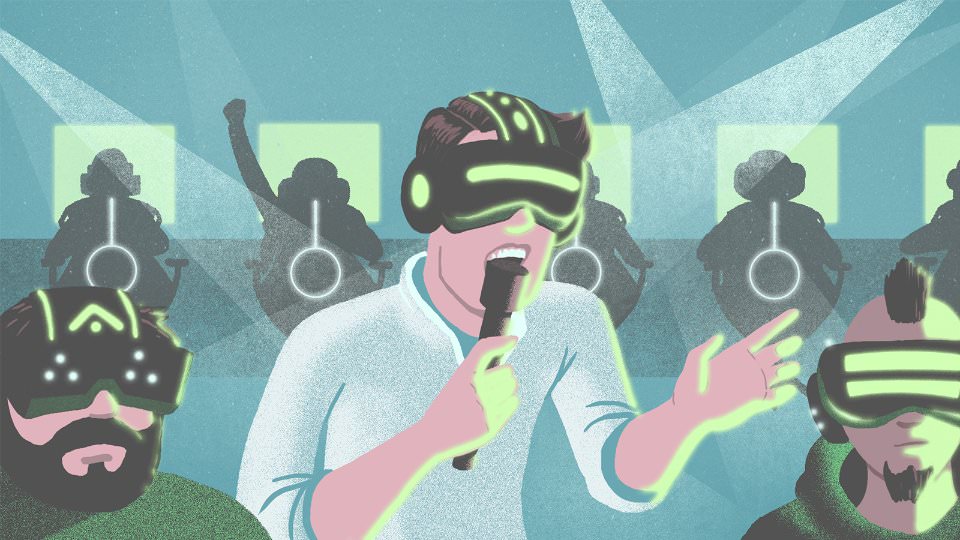 The UK games industry is thriving. It was worth a record £4.33bn in 2016, according to trade body Ukie. With eSports becoming as popular as spectator sports, there’s a demand for so-called shoutcasters, who perform the same function as football commentators and pundits. They let the viewers know what’s happening – and just how excited they ought to be about it. Top eSports competitions are broadcast online, not just by specialist games sites, but also by ESPN, Yahoo! and even the BBC.

British shoutcaster Mr Chris Tunn recently told the BBC that most shoutcasting booths contain a play-by-play caster and another caster who provides colour commentary. “The colour guy knows a lot about the game, a lot about the tactics and inside information,” he says. “I then ask them why something was good or why it was bad.”

Professional eSports players can earn six-figure salaries, but until recently there were few full-time shoutcasters. One exception is Mr Trevor “Quickshot” Henry, a full-time shoutcaster for Riot Games, the company behind the vastly popular online game League Of Legends. In 2012, Mr Henry was working as a games community manager. “In my lunch breaks I would watch League Of Legends streams and I’d stay late to play,” he says. “My manager told me off and said, ‘Why don’t you make that your job?’ After exploring the idea, I decided to give shoutcasting a try.” He joined Riot Games the following year, and now officially commentates on the League Of Legends Championship Series, a professional eSports league.